With just a few days to go before our trip to Tortworth, on Sunday 31 May, the weather forecast was dire - would it go ahead? In the event the weather relented and we enjoyed a day at this amazing arboretum led by the irrepressible Tony Titchen, an ideal guide for this collection as he had been involved with the identification and cataloguing of the trees in the past. We had invited members of our other groups and were delighted to be joined by representatives from Bristol Naturalists, Gloucester Naturalists and Friends of Dyffryn Gardens. 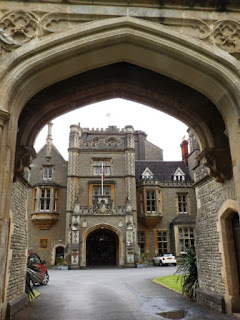 For those unfamiliar with the location, the arboretum is in the grounds of the Tortworth Court Hotel near Wotton under Edge and a convenient 45 minute drive from Cardiff. There is plenty of history to this place as Tony pointed out. As far back as Edward I's reign (1272 - 1307) the manor of Tortworth belonged to Sir Nicholas Kingston. The Veel family held it for 200 years when it included a deer park; then the Throckmortons and finally the Ducie family who owned it for 350 years. The house itself was built between 1849 and 1853 by the 2nd Earl and was designed by Samuel Teulon. During the Second World War the building was used first by Royal Navy as a training establishment when it was referred to as HMS Cabbala. Next, American servicemen took up residence and it was at this point that some of arboretum trees were lost due to the spillage of vehicle oil. In 1991 the house was bought by Phillip Stubbs but a disastrous fire caused widespread damage. The structure was then purchased by Four Pillars Hotels and their restoration is what you see today. 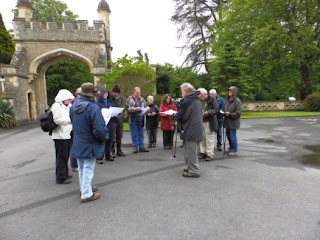 And now to the purpose of our visit: the arboretum itself. Whilst some mature trees predate the arboretum it was the 3rd Earl who started planting in 1853 and created an arboretum which at the time was a rival to Westonbirt. Our tour started with a Robinia pseudoacacia (below) but this was the contorted form 'tortuosa'. Robinia originates in the Eastern and mid-Western USA arriving in Europe in the 17th Century. 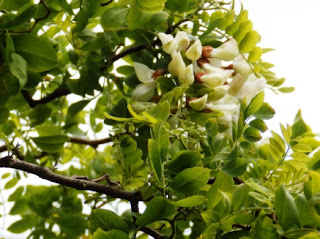 Then a Blue Cedar, Cedrus atlantica, the form 'glauca' of the Atlas Cedar from the Atlas mountains of Morocco and Algeria. Tony pointed out the characteristic short needles which contrast this cedar with most others. And then a massive Southern European Plane, Platanus hispanica, often referred to as a London Plane. The girth was impressive although, as with many of us, the bulk had shifted downward in old age. 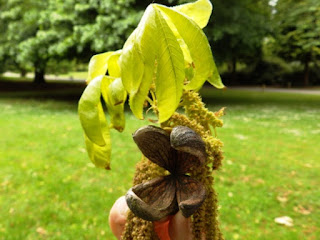 A Shagbark Hickory followed (above), Carya ovata, from North America, and one of 7 different species but distinguishing them can be tricky. However it usually (but not exclusively!) has 5 leaflets whereas the Mockernut and Shell-bark Hickory - the other two with large leaves - usually have 7. 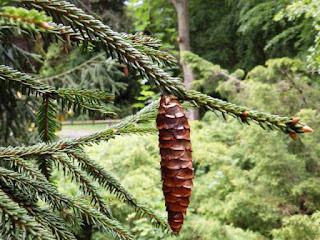 An Oriental Spruce (above), Picea orientalis, was obligingly sporting some cones - Tony reminded us to look out for the unusually short needles on this tree. Many of the trees were supporting Mistletoe including species which were quite unexpected such as the Red Oak, Quercus rubra. A stream marked a valley fault line with acid soil to one side and the other alkaline, helping to enable such a wide variety of tree species to flourish. 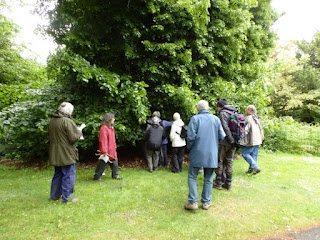 Posted by Stephen Nottingham at 9:08 AM