A Year in the LIFE of RSPB Cymru

At the 28 January 2016 meeting, Daniel Jenkins-Jones talked to members of Cardiff Nats about RSPB Cymru’s varied activities during 2015. He summarised developments on RSPB Cymru’s nature reserves, briefly outlined the organisation’s political lobbying work, noted its ‘off-reserve’ conservation work, and looked at the ‘Giving Nature a Home in Cardiff’ campaign.

The RSPB owns and manages around a dozen nature reserves in Wales, and manages a number of other sites. Daniel presented figures for breeding pairs of birds in 2015 at these sites. There was bad news, in the alarming decline seen in the UK for seabirds and other bird species, but good news in that conservation action on RSPB Cymru reserves is protecting and increasing bird populations.

Landscape work to extend wetland areas (using machinery funded through landfill tax) at the RSPB Malltraeth Marsh nature reserve on Anglesey, for example, has increased the lapwing population, and also resulted in a pair of hen harrier nesting in the area (the last breeding pair here was seen in 1974). Ynys-hir, a wetland area on the Dyfi estuary in Ceredigion, also has breeding lapwing, and notable populations of, among others, redshank, pied flycatcher, wood warbler and Greenland white-fronted geese. At Lake Vyrnwy, the largest site managed by RSPB Cymru, habitat management is helping moorland-breeding birds such as hen harrier, black grouse and merlin (the latter species has suffered a crash in numbers in the UK).

On Ramsey Island, RSPB Cymru’s work is helping protect a number of seabirds whose numbers are generally in decline; breeding success has been recorded, for instance, for guillemot, razorbill, kittiwake, Manx shearwater, storm petrel and chough. Daniel described how eradicating rats on Ramsey Island, by employing a New Zealand company who used baited peanut butter, was a key action in reducing breeding bird mortality. At nearby Grassholm, part of the UK’s third largest gannet colony can be seen online thanks to RSPB Cymru (Google ‘gannet cam Grassholm’). The organisation does important work releasing gannets trapped by the plastic waste (mainly originating from the Marine fishing industry) that they bring back to their nests. In 2015, 50 gannets were freed (550 in total have been rescued in the last few years). With work on several other reserves noted, the scale and variety of RSPB Cymru’s conservation work during 2015 became apparent.

Political campaigning is an important part of RSPB Cymru’s work, and they have a regular presence at the Senedd - the home of the National Assembly for Wales. 2015 was an important year in this respect, with the drafting of the Environment (Wales) Bill, which will put into place legislation for planning and managing Wales’ natural resources in a more integrated and sustainable way. However, conservation organisations considered that, under the influence of Natural Resources Wales, it placed too much emphasis on business and not enough on nature; Daniel noted that the first draft did not even mention nature, though lobbying by RSPB Cymru and other NGOs has put nature into the Bill’s final wording. Last year, the RSPB was also very active in formulating and promoting the Nature and Wellbeing Act. In addition, RSPB Cymru were involved in advisory work with farmers, and around 100 case studies ranging from small-scale to large-scale projects such as the Swansea Tidal Lagoon.

Following a report that showed the low level of engagement with nature among Welsh school-age children, RSPB Cymru has been committed to more educational work. One new initiative in 2015 was the ‘Giving nature a home in Cardiff’, which involved hands-on practical visits to 90% of Cardiff’s schools. This was funded with the help of the plastic bag charge in Wales.  As part of the initiative, RSPB Cymru undertook the ‘Tape’ project in Bute Park, with the help of Arts Council Wales funding. This installation, which involved large amounts of non-sticky tape strung around trees to build a raised structure that could be entered, was visited by around 74,000 people (10,000 venturing inside). All the plastic is being recycled to make wild flower planters to put around Cardiff.

Daniel concluded his talk with a look at how people can help RSPB Cymru, through volunteering (not just habitat management, but also in administration roles). The easiest way to support the organisation’s work, however, is to join. Follow the link for further information: 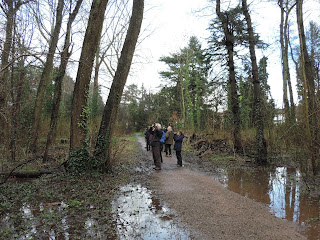 About 12 intrepid bird watchers met at the north end of Roath Park Lake on Sunday, January 10th 2016. Conditions were far from ideal as it was raining and very wet underfoot from the rain the night before. We first walked around the woods to the north of the lake and then around the lake itself but by the time we returned to the cars, heavy rain and hail commenced so it was decided not to move on to a second location but to return to the comfort of our homes.

However, we were able to see some notable birds, namely – a Great Spotted Woodpecker, Long Tailed Tits, Redwings together with the usual residents of the wood all to the accompaniment of a Song Thrush. On the lake we saw a Pochard, Little Grebes, Tufted Ducks together with the Mute Swans, Coots, Moorhens & Mallards.

Thanks must be given to Linda & Rob Nottage for organising the event in spite of the inclement conditions.

Posted by Stephen Nottingham at 9:25 AM No comments: