A few snippets from some recent rambles.

Beetles on a Gower beach
First Whiteford on Gower, which Cardiff Naturalists' last visited to look at beetles a few years back with Steve Bolchover. A fine day in mid-June this year and the same stretch of sand on the edge of the dunes around SS 4428/9517 was productively revealing. The key appears to be to find a larger plank of wood or branch or tree trunk that is just above the recent high-tide mark but below the dunes. Lift slowly and see what lies beneath. The black beetle, Broscus cephalotes, was found quite easily. They either stayed put or went scuttling off across the beach. 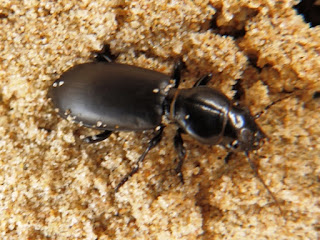 
Not so common but also in evidence was Nebria complanata, sufficiently rare to warrant its own Species Action Plan. It feeds on sandhoppers at night and is variously referred to as the Strandline Beetle (as is Broscus cephalotes!) or Beachcomber Beetle. Have your camera ready if you find one under timber as they often burrow down into the sand. 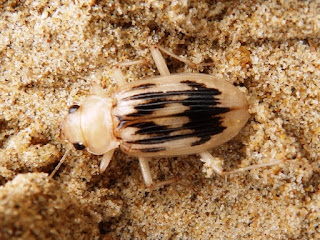 Running around on the surface of the beach in the same area was the Dune Tiger Beetle, Cicindella hybrida, and helping to procreate the species were the two below. They can travel at speed so are not always easy to photograph but these two had other things on their minds. 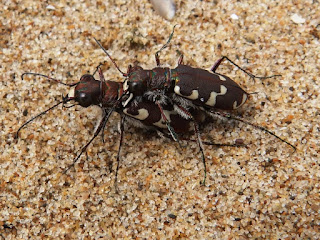 Galls on Gower and at Culverhouse Cross
Whilst on Gower another gall to add to the existing 'collection'. This I take to be Aulacidea hieracii described as having ovoid or elongate swelling of the stem, green at first then hard and brown. This was on several Hawkweed plants in the car park at Oxwich Bay. 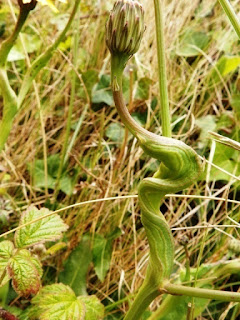 The Copthorne Hotel at Culverhouse Cross roundabout, Cardiff, has the usual common shrubs and trees but the Hawthorn was showing examples of the gall shown below. It has been a struggle to identify this one and any expert views would be most welcome. Photographic comparison with web images suggests Gymnosporangium as a possibility - caused by a fungus. Whereas clavariiforme is usually associated with Juniper which does not seem to apply here, this could be confusum. 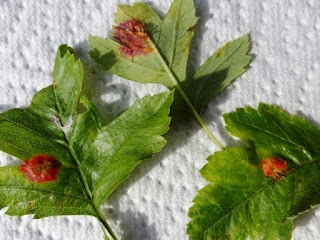 ... and not far away some Holm Oaks, Quercus ilex, with the gall shown below. Again, information on galls affecting this oak is limited, the main reference being to Aceria ilicis. caused by a mite. 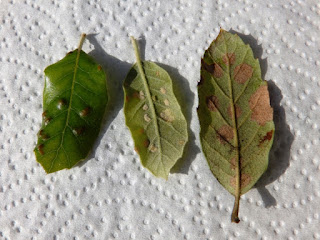 The next challenge is the gall causing these swellings on the leaves of Hop Trefoil, Trifolium campestre, on which I have again drawn a blank. There is little enough on possible galls for this plant, one candidate being the mite Dasineura trifolii but the description of this refers to folding of the leaves along the mid-rib which is not that evident here. Again, any insights from readers would be helpful. 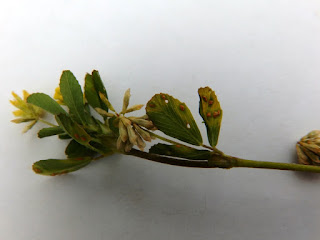 Orchids and Pearly Everlasting
A walk near Treorchy in late June was something of a revelation. A forestry track which starts just north of Cwmparc SS 9472 9617 by a metal barrier is worth trying because of the profusion of Southern Marsh orchids. Up to this point we had been walking through heavily sheep-grazed turf and the only plant you tend to find is Tormentil, Potentilla erecta, although it was interesting to note that Lady's Mantle, Alchemilla sp., was growing in clumps suggesting it is unpalatable even to the voracious sheep. Once into the sheep-free area the botany was a revelation. One of the usual suspects was Pearly Everlasting. The following extract is from a field trip in 1994 to Kenfig by The Wildflower Society:
'Then we came to a first record for Britain, Anaphalis margaritacea, Pearly Everlasting, which was recorded in the South Wales valleys in the seventeenth century and is now spreading over Wales.'
It is certainly quite common in the Valleys, is visible on the edge of the M4 around the Pyle turn-off and turned up on Coppet Hill near Goodrich growing under bracken. Despite its local ubiquity it is almost completely ignored by wildflower books. Wouldn't it be nice to know more about this plant? 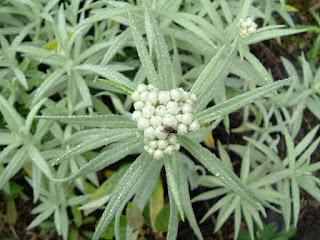 A smattering of Common Spotted Orchids, Dactylorhiza fuchsii, was eclipsed by the Southern Marsh Orchids Dactylorhiza praetermissa which appeared to favour the damper runnels alongside the forestry track and stretched for a mile or more giving one of the best displays you are likely to come across in this part of the world. 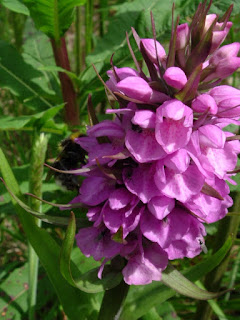 Photos by Bruce McDonald
Posted by Stephen Nottingham at 11:19 AM No comments: