Shaping our City - Is there Room for Wildlife ?

What is of interest to all of us as Naturalists is the fact that the process is running again and the LDP Candidate Site Register has now been placed on-line by Cardiff City Council. at http://www.cardiff.gov.uk/content.asp?nav=2870,3139,3154,5845,6189&parent_directory_id=2865

That is where people like us come in, we can ensure that they know of the value of valuable sites and therefore can make their decisions based on practical and factual information

Regards
Andy
Posted by Shenstone at 6:02 PM No comments:

Glorious weather today enticed me to find the cross country route to Pentyrch from home.

Accompanied by soaring Buzzards and constant birdsong.I had glimpses of two Butterflies, the first I've seen this year, but the brief glimpse was not enough to identify them.

Crossed a large field with gambling newborn Lambs and wonderful views of the Garth across the valley and eventually entered Pentyrch.

I headed for the Lewis Arms to quench my thirst which was when the realization hit me that my pockets were empty!

A great walk which I intend repeating, but next time with some cash in my pocket!

Conservation and Research at the National Botanic Garden of Wales

Dr Natasha de Vere, Head of Conservation and Research at the National Botanic Garden of Wales, talked about the Garden’s science projects at last night’s meeting of the Cardiff Naturalists’ Society.

The garden opened in May 2000, near Carmarthen. It gained a molecular biology laboratory last year. Its flagship science project is called Barcode Wales. Dr Vere told the meeting that the aim of the project was to DNA barcode all the native flowering plants in Wales (1,143 species). The project is due to be completed by the summer and will make Wales the first nation to achieve this biodiversity goal.

The DNA for most species is extracted from herbarium specimens, supplemented by field collection. Two genes (rbcL and MatK) act as a unique species barcode. Once the data has been published, it will be made available for numerous applications, including forensics and the identification of plants used in food and herbal mixtures. A current project is identifying what flowers bees visit, by identifying the pollen collected. As part of the funding for this project, the public can select a Welsh plant and sponsor its barcoding.

A National Nature Reserve (Waun Las) is situated adjacent to the gardens. Grassland management and restoration is a key goal. A species-rich area of grassland, for example, was successfully transplanted from a school playing field that was being redeveloped into the reserve. This National Nature Reserve is of particular importance, according to Dr Vere, because it is also a working organic farm. The reserve is therefore a model of how agriculture and biodiversity can co-exist. The farm has Welsh black cattle and two breeds of sheep. Meat from the animals is used in the Garden’s restaurant and is sold to the public.

The Garden also grows its own food in a series of trial allotments. These also contribute to the Garden’s extensive education programme (schools and adult lifelong learning). One horticultural project involves looking at the medicinal properties of tea plants, in particular identifying the bioactive component that suppresses Clostridium difficile (a bacterium that causes infections within hospitals).

The centre-piece of the Garden is the largest single-span glasshouse in the world, holding an important collection of Mediterranean flora. Over 12,500 plant accessions can be found in the Garden. A new arboretum will focus on temperate woodland trees (e.g., from South America); while a library, archives and herbarium have recently been established. The Garden is also forging many international links. Dr. Vere noted valuable exchanges with South Korea, where the new national botanic gardens has been modeled in part on the Garden (and will include three domed greenhouses like the one in Wales).

The National Botanic Garden of Wales has therefore come a long way in a decade. In its fourth year there was a financial crisis that came close to shutting the place down, but since then the Garden has gone from strength to strength. A third of its funding comes from the Welsh Assembly, a third from visitor income and a third from other sources such as fundraising and corporate hire. Dr Vere stressed the important contribution made by students and volunteers at the garden.

For further information on the National Botanic Garden of Wales:
http://www.gardenofwales.org.uk/
Posted by Stephen Nottingham at 10:44 AM 1 comment:

From one of our members

Here are two snaps I took on my 'phone of  Wild Daffodils (Pseudo Narcissus Lobularis) at Coed y Bwl Wood, Castle Upon Alun, last Sunday.  They are not yet in their full glory, but the banks should be ablaze within the next fortnight. 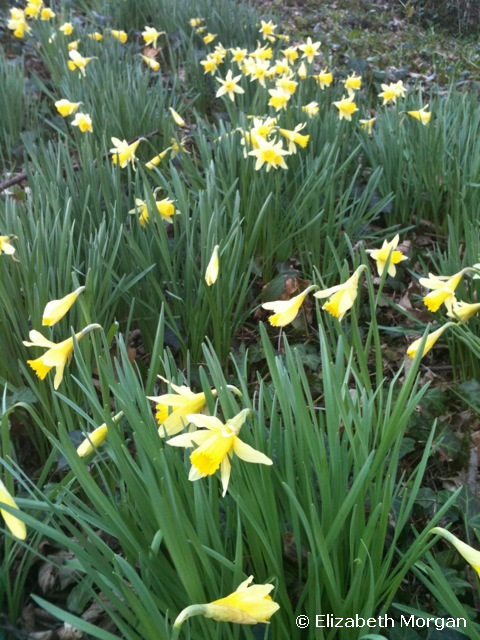 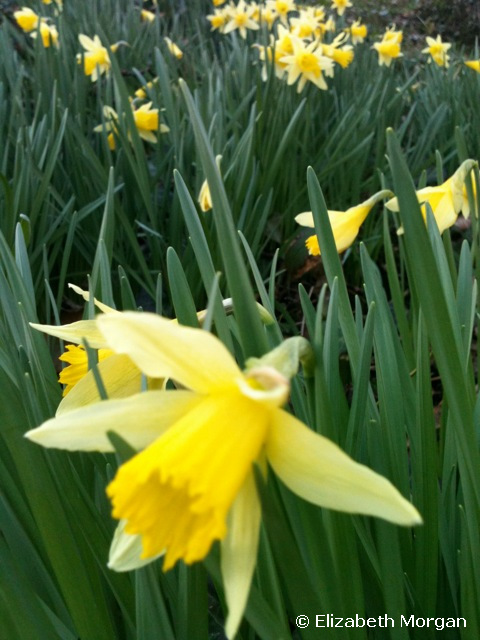 Sounds like a good idea for a walk to me

Posted by Shenstone at 9:30 PM No comments:

Our 2011 Biosciences Prize winner Zalina Bashir Ali gave us an absolutely superb presentation tonight and totally typified the type of excellence that we were hoping would be inspired by our award. 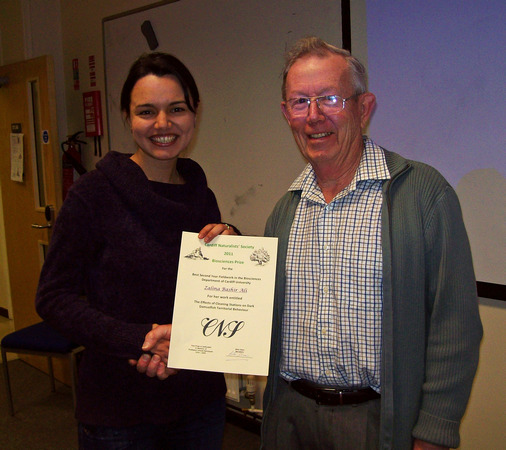 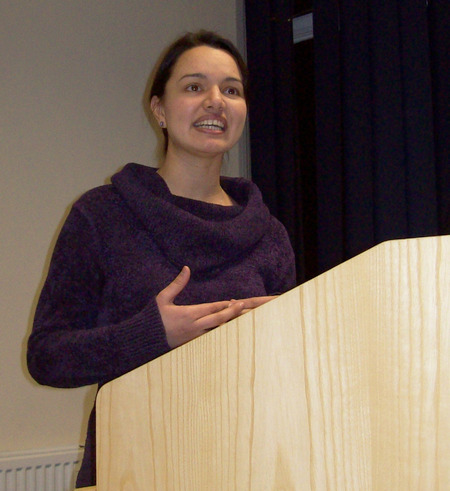 Zalina giving her excellent presentation
The Cardiff Naturalists Society is proud to award a prize for the best 2nd year Student fieldwork in memory of our former member Professor Ursula Henriques.

Following this talk in lieu of the planned main speaker we had another excellent presentation from Margaret and John Samuel who stepped in at late notice to give us a real insight into an area that few of us have considered visiting, but is a real nature and history lovers paradise