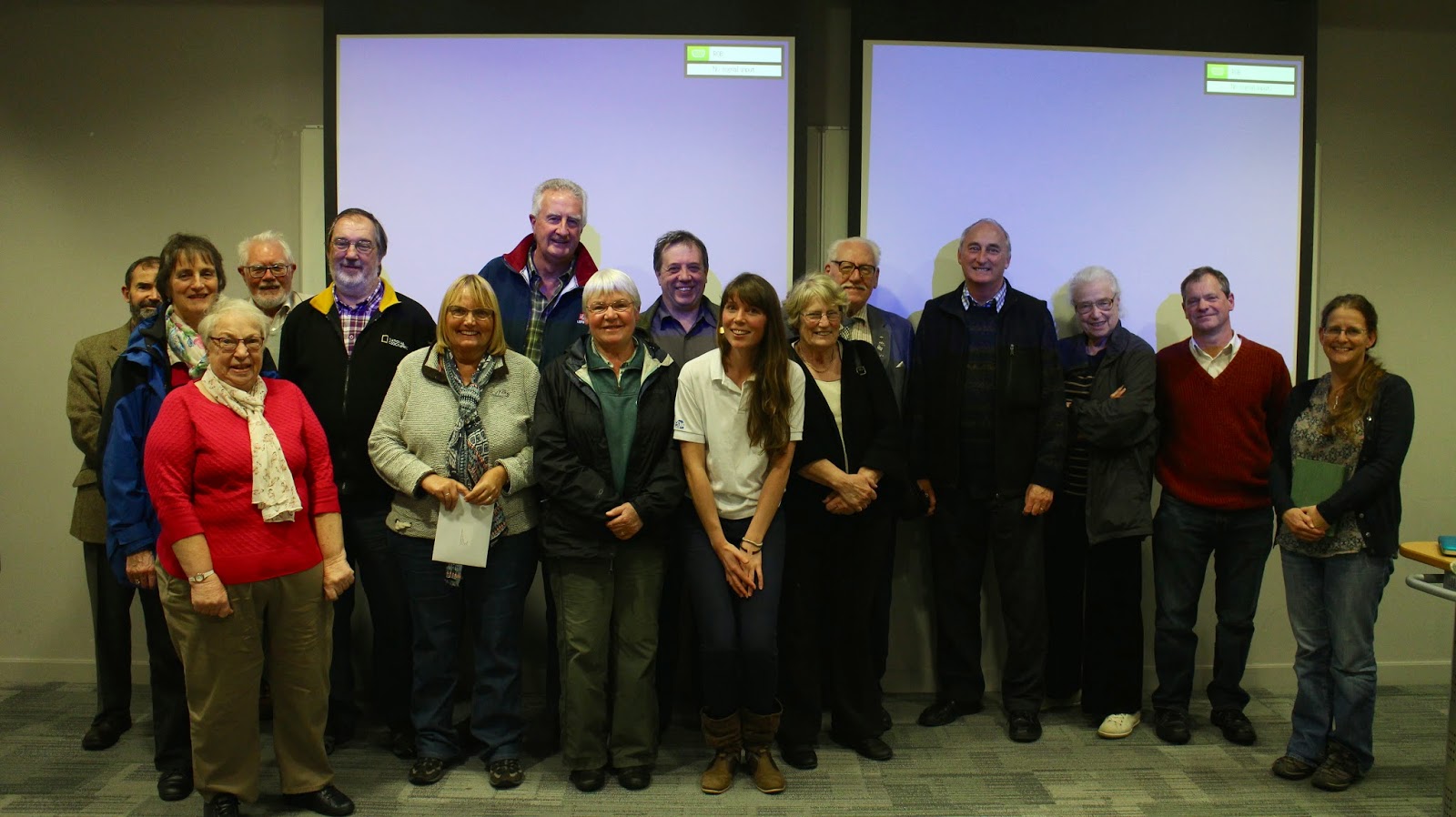 Sally took time out of her busy schedule to give the Cardiff Naturalists’ Society a fascinating, entertaining, and very informative talk about the whale shark (Rhincodon typus) and the work she has been involved in with the Large Marine Vertebrate project (LAMAVE), an initiative of the NGO Physalus, in the Philippines. The talk on Monday 13 Oct was illustrated with spectacular images by LAMAVE photographer Steve De Neef. Sally was accompanied by Dr Alessandro Ponzo, the President of Physalus and her partner, who kindly took the group photo above.

Whale sharks can be individually identified by their unique pattern of spots. Sally explained how an area on the left side behind the head is photographed, and a computer algorithm used to confirm an individual’s identity compared with a database of whale shark images. To date, over 700 individuals have been identified from photographs. This relatively cheap technique has advanced the study of the shark’s behaviour. Whale sharks can swim considerable distances; satellite tracking of tagged sharks have revealed journeys of over 5,000 km in Asia. Combined with biopsy data, we now know there are no isolated populations of whale shark – genetically they mix across the globe. 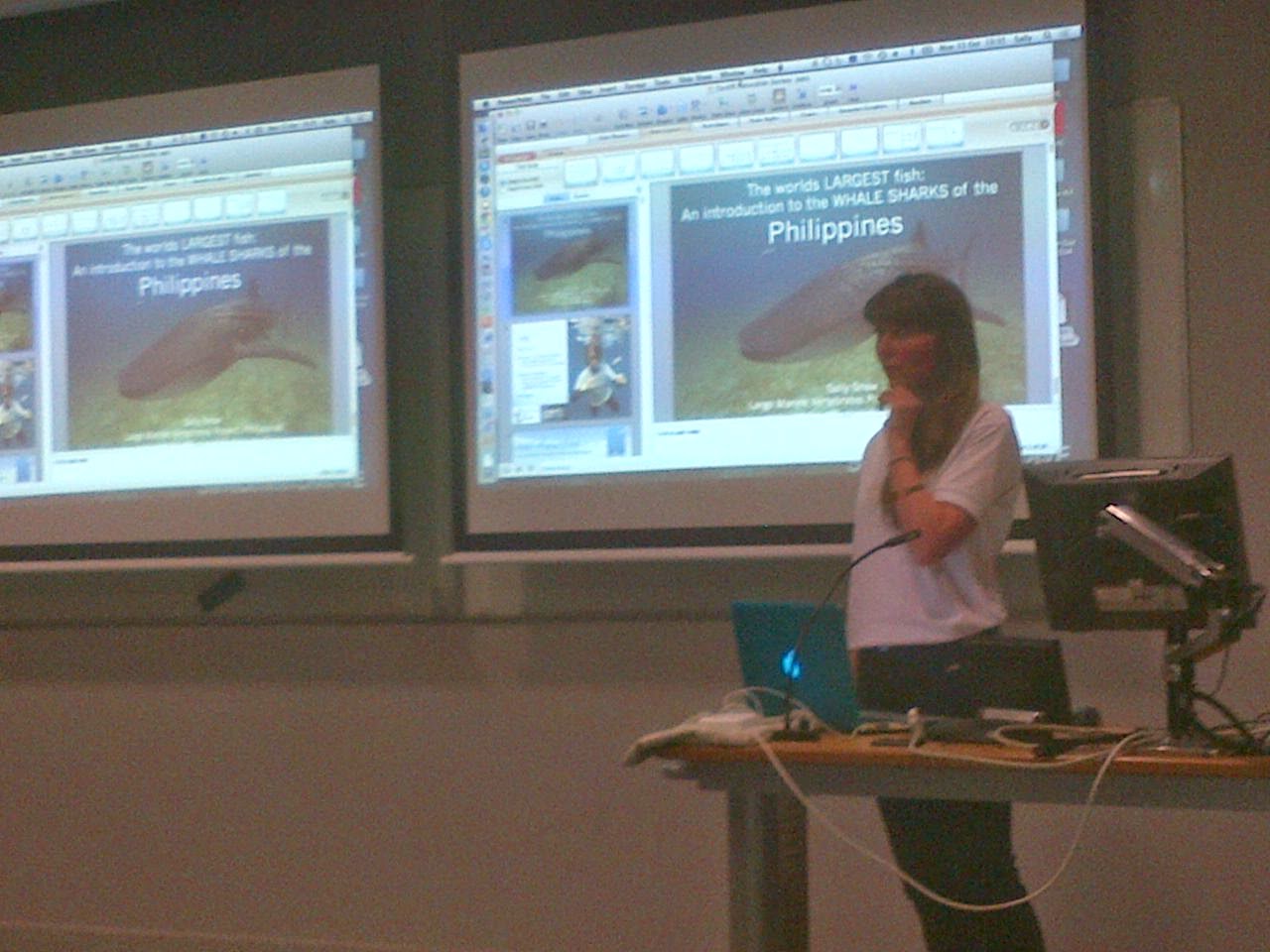 The whale shark can grow up to 20 metres long and live for over 50 years. They are filter feeders and capable of deep dives. The biodiverse seas around the Philippines are a vital habitat for the species and they are known to give birth there. They are now protected in the Philippines, though not in other the seas off neighbouring countries, with bans on catching whale shark been put into place relatively recently. They are now being exploited in a new way: tourism.

Sally emphasised that not all wildlife tourism is eco-tourism, in fact most is not. There are four areas where tourists are taken out in boats to see whale sharks in the Philippines. She contrasted whale shark tours in Oslob, where guidelines are not enforced, with an eco-tourism operation in Leyte that LAMAVE is helping operate. In Oslob, the whale sharks are crowded by too many boats and are approached too closely by divers; over 2,000 people can be in the vicinity of the sharks in a five-hour period. In Leyte, strict rules are enforced on how to approach whale sharks to minimise disturbance.

Commercial whale shark tourism operations are now provisioning – artificially feeding the whale sharks from boats to facilitate tourism. The LAMAVE team’s scientific data is showing that this can affect the sharks’ behaviour in an adverse way. They do not provision in Leyte and Physalus recommend that provisioning be stopped. Eco-tourism when carried out in a responsible manner, however, provides an alternative local source of income, can benefit conservation if environmental fees are charged, and can have a beneficial educational role.

Posted by Stephen Nottingham at 2:32 PM No comments: Links to this post

Next Indoor Meeting, on 13 Oct: Sally Snow on Whale Sharks

At the next indoor meeting of the CNS, on Monday 13 October, Sally Snow will talk about 'The world's largest fish: an introduction to the whale sharks of the Philippines'.

The meeting will be held in Room 0.23 (ground floor) at the Cardiff School of Management, Llandaff campus, Metropolitan University, Western Ave, Cardiff.

Sally Snow was born in west Wales. She grew up sharing a house with wildlife, because both her parents were also Doctors of Zoology. Sally studied Zoology and Psychology at Bristol University, which led to her working both as a researcher and associate producer on programmes for the BBC, National Geographic and S4C.

In 2012, her interest in whale sharks took her to the Philippines. She joined a team at WWF-Philippines, and then became involved with Physalus, a non-governmental organisation specialising in Marine Vertebrates. Sally is now part of the small team that helps run Physalus’ Large Marine Vertebrates Project in the Philippines (LAMAVE). It is her work with Physalus that will form the basis of her lecture to the Cardiff Naturalists' Society.

According to her website: "She continues to divide her time between her production work, developing her own film projects, working with rural communities to help them develop sustainably, conducting conservation research and holding her breath underwater for as long as possible to identify Whale Sharks and the occasional Manta Ray."

We look forward to welcoming you to the talk.

For further information about Sally Snow and Physalus, see the following websites: